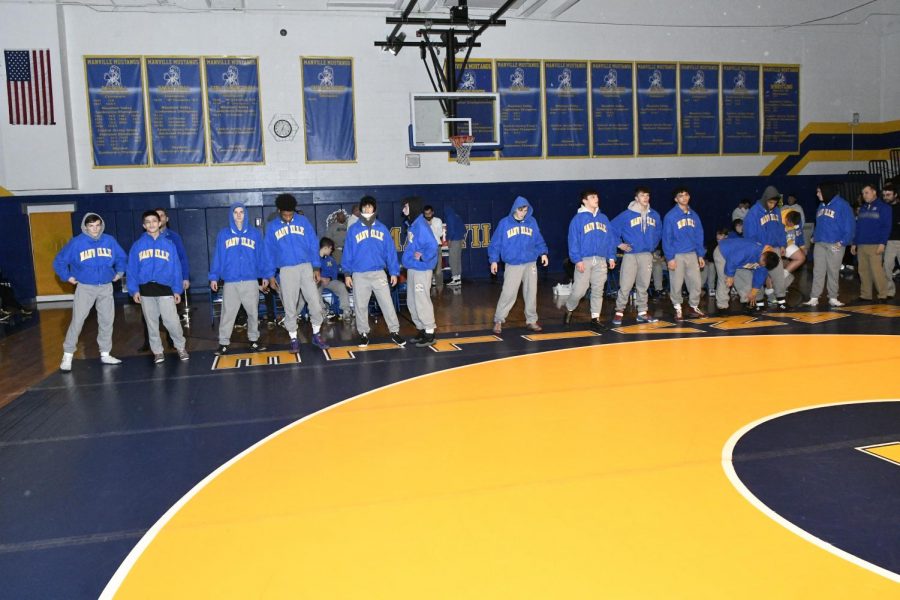 According to Coach Gorbatuk, wrestling started Monday, March 1st, and is going to end April 16th. They have won four times and lost seven of the twelve matches. Practices are held in the ABIS gym and when the mats are rolled out they do their normal routine pre-COVID. They are still being safe as they use two full mats, and it makes practice even better as they used to practice in a small wrestling room. Their previous safety and hygienic procedures follow the COVID guidelines, and are keeping the wrestlers and coaches safe.

The coaches positives this season is that they are able to focus on their schoolwork, and they are still bonding in spite of the challenges COVID is throwing at them. The negatives are that the season was cut short, and that they were not able to do the team tournament where Manville has excelled many years prior. Although the team is not doing as well as the years before, some of the losses are because the lower weight classes were not able to be filled. COVID itself did not make practices harder, but the lack of spring and summer training did.

Jacob Reilly, a junior wrestler says that the team is going well but that they all need to pick up the pace. Jacob also says that practices are mostly normal except for wearing a mask when getting a drink or when they are off the mat. His positives are that there is a good lineup and some experienced members have also joined the team. His negative is that the wrestlers are not in top condition because they did not have their spring and summer training. Compared to other years there is not a big difference as the wrestlers are still great and as hardworking as ever. Go Mustangs!